There have been many creative responses to Beowulf. To read more about J.R.R. Tolkien, start at this page on this site.  To read about John Gardner, turn to this page.

Other creative texts appear below. Here is the description from Amazon for Michael Crichton’s Eaters of the Dead.  “The year is A.D. 922. A refined Arab courtier, representative of the powerful Caliph of Baghdad, encounters a party of Viking warriors who are journeying to the barbaric North. He is appalled by their Viking customs—the wanton sexuality of their pale, angular women, their disregard for cleanliness . . . their cold-blooded human sacrifices. But it is not until they reach the depths of the Northland that the courtier learns the horrifying and inescapable truth: He has been enlisted by these savage, inscrutable warriors to help combat a terror that plagues them—a monstrosity that emerges under cover of night to slaughter the Vikings and devour their flesh . . .” 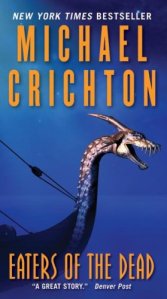 Michael Crichton’s Eaters of the Dead

M. J. Toswell, professor of Anglo-Saxon literature at the University of Western Ontario, has recently published a book examining Borges’s medievalism. Read about it here. One poem by Borges is entitled “Poem Written in a Copy of Beowulf.”

At various times, I have asked myself what reasons
moved me to study, while my night came down,
without particular hope of satisfaction,
the language of the blunt-tongued Anglo-Saxons.

Used up by the years, my memory
loses its grip on words that I have vainly
repeated and repeated. My life in the same way
weaves and unweaves its weary history.

Then I tell myself: it must be that the soul
has some secret, sufficient way of knowing
that it is immortal, that its vast, encompassing
circle can take in all, can accomplish all.

Beyond my anxiety, beyond this writing,
the universe waits, inexhaustible, inviting.

Yet another author inspired by the Middle Ages is Poul Anderson, who came up with scientific words dealing with atomic theory without use of Latin or Greek to show how such words would look like with only a Germanic base.

It has been suggested by Donald Hofstadter that we should call this “Ander-Saxon” (for Anderson-Saxon, a parody of Anglo-Saxon).  The work Anderson wrote is called Uncleftish Beholding.  You can read about it here and read the actual work Uncleftish Beholding here. It appeared in Analog Science Fiction/Science Fact, volume 109, no. 13, pages 132–135, mid-December 1989. Here is a cover from the 1970s. 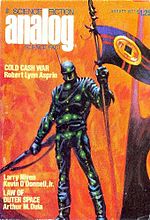 Anderson’s story appeared about 12 years after this cover.